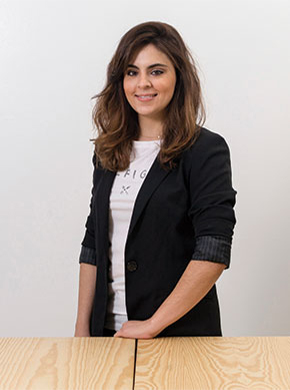 Mexican at heart, American by thought. When I was 10 years old, my family and I went in search of the famous American Dream. The thing is, it wasn’t as big of a deal to me at the time but now that I think about it, it’s as if I had won the lottery.

I learned English with persistence and graduated from Chapman University in Orange County, California with a degree in Public Relations and Advertising. I had the tremendous pleasure of learning from people who had worked at Warner Bros, Sony Screen and even with the Harry Potter franchise. At university, I worked on advertising campaigns for Lexus and Enzoani. And from these campaigns, I learned a lot, even the things that are not written down.

I’ve always believed that it is important to be curious about what lies outside our comfort zones. That was how I decided to study at the Universidad de Salamanca. I was astonished by it and once I returned, all I could think about was going back there someday.

In 2014, I decided that Hollywood wasn’t for me and now here I am, at Súmate in the SEO Copywriting Department (the coolest department). And since then, I made the phrase, “pick a job that you like and you won’t have to work a day in your life,” become reality. I love what I do and the way in which we are forced to evolve, change and adapt our work for the user.

I love food, spending time in nature, music that reminds you of different moments in your life, getting lost in travelling, photojournalism, being multicultural and learning from the people around me. By the way, to me, putting on make-up is like painting on a blank canvas.

“What would you attempt to do if you knew you could not fail?”- Robert H. Schuller

Keep getting to know the team